They say that it’s important to know your animals before you photograph them. I didn’t! And when I got there, I found that gazelles run for their life as soon as they think that a human being is taking some interest in them. The majority of these gazelles live in India and their existence is constantly under threat. In India, a large number of these gazelles live in the Thar Desert. Bishnoi villages protect them, but their numbers have been on the decline in some other parts of the desert.

I set up my tripod  well actually far away from a water body (yes it was the monsoons and some pits had water in them although the monsoons were below normal) and waited all day. I could photograph them because I was using a 500 mm lens. I engulfed myself and my gear around dry twigs that I had collected along the way. I traveled through the desert by camel. I got some photographs of curious gazelles trying to figure out what was on the other side of those twigs, some distance away from them. I did not manage to photograph more than one animal in a frame on this entire trip. Having said that, we never came upon more than six at a given place at one time but a hand-held setup, say the 400 mm lens would have given me the opportunity to photograph them more loosely. 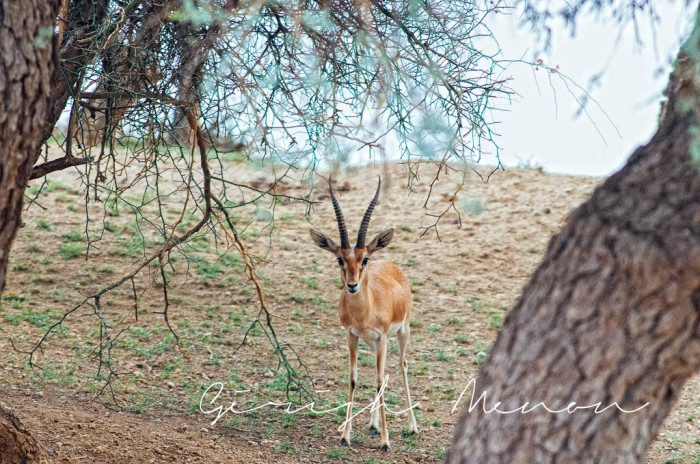 I am a professor of photography. I have filmed an entire workshop that I teach, titled Master Your DSLR Camera F.A.S.T. that teaches you how to set your camera in the manual-mode depending on the subject and lighting conditions that you’re working with. The videos are free, as you can see below. I also teach this course online. You can get in touch with me through this blog or my professional website, www.girishmenon.com. I’m on twitter as @travelphotogiri and facebook too!

There was an error retrieving images from Instagram. An attempt will be remade in a few minutes.